Some photos from the sneak preview of Ouija horror film I Am ZoZo. It was packed house and Ewan McGregor showed up to support the film! 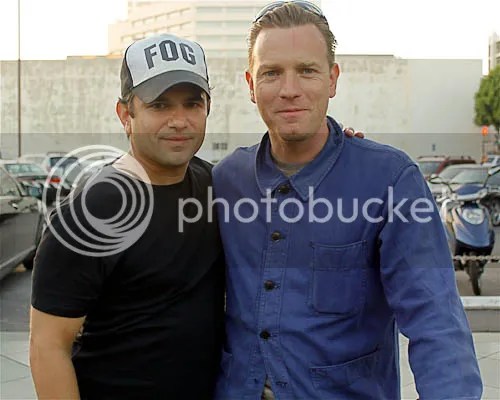 Indie stalwart One World Studios gave a sneak preview of their unique Ouija horror film I Am ZoZo, that was shot entirely on Super 8mm. The house was completely packed and Ewan McGregor showed up on his motorcycle to enjoy and support the film.

After more than a year of work filmmakers Scott Di Lalla and Zack Coffman unleashed their newest film on the unsuspecting crowd gathered at Laemmle’s Monica 4-plex for a sneak preview of Ouija movie, “I Am ZoZo.” that was shot entirely using Super8mm. All the young actors were on-hand for the screening and Ewan McGregor even arrived on his motorcycle to support the film.

I Am ZoZo is a psychological horror film about five young people who play with a Ouija board and attract the attention of the malevolent Ouija demon ZoZo. The film is based on widely reported real experiences with this ancient and malevolent spirit that attaches itself to people exclusively through the Ouija board. The film was shot last Halloween entirely on location on San Juan Island, WA and Seattle and was shot entirely on Kodak Super 8mm negative film stock.

The film was crafted with a European sensibility (ala the Dardenne brothers) and the unique look of Super8mm harkens back to the golden age of horror. I Am ZoZo was intentionally made to be as legitimately scary as possible while steering clear of overt violence, sex, or language to maximize viewership potential; holding to the age-old maxim that, “That which is unseen is the most terrifying.”

I Am ZoZo is the sixth feature from award-winning One World Studios toppers Scott DiLalla (writer/director) and Zack Coffman (producer). Their previous features having been docs, DiLalla and Coffman bring a unique verite style to the film while still maintaining the “fourth wall”. On the making of the first legitimate Ouija movie since Witchboard, DiLalla had this to say, “So many young people are out there playing this for fun, I wanted to show the darker side of what can happen. A real horror film shouldn’t be about selling toys, it should be truly frightening on a deeper level. I Am ZoZo is a cautionary tale that will sit with people long after they’ve seen it.”

Film facts:
* I Am ZoZo features actor Caleb Courtney, the older brother of Super8 star Joel Courtney.
* Darren Evans of Oklahoma City survived a well-documented ZoZo attack and has since dedicated his life to warning people about the dangers of Ouija boards and this demon. The self-styled Zozologist travels the country meeting with other survivors and assisting them in disposing of their boards and eradicating the demon from their lives. Mr. Evans is featured as himself in I Am ZoZo.
* The music for the film features independent stalwarts such as Mark Kozelek (Almost Famous), Blood Warrior, and The Tragic Tantrum and the haunting score was composed by award-winning composer BC Smith (Smoke Signals).

From the I Am ZoZo website:
WARNING: this film is based on a real Ouija Board experience gone wrong. — Five young people play with a Ouija board on Halloween weekend and things take a terrible turn for the worst when they become the target of the malevolent Ouija spirit that calls itself ZoZo. Based on documented true events.

About the One World Studios Ltd.:
Founded 2002 One World Studios has grown into an award-winning, fully integrated independent film company specializing in the production and distribution of films, DVD, online movie streaming, music and associated original and licensed merchandise.

Their first motorcycle movie “Choppertown: the Sinners” focused on a renowned group of California bikers known as the Sinners. Produced in 2005 with a stack of credit cards, this award-winning documentary heralded a return to the values of a simpler time. The anti-Hollywood picture shows the true story of a young Sinner and his biker brothers as they help him build an old-school custom bike from the ground up. Their motto: “A bike isn’t finished until you put some miles on it with your bros.” Featuring several well-known Sinners such as rocker James Intveld, insane skater Jason Jessee, custom builder Cole Foster, and Kutty Noteboom.

The filmmakers are currently entertaining offers for “I Am ZoZo” from theatrical distributors.

UPDATE: Since the screening several audience members have actually reported night terrors and insomnia due to the disturbing mental imagery portrayed in the film.

What are your Ouija Stories?